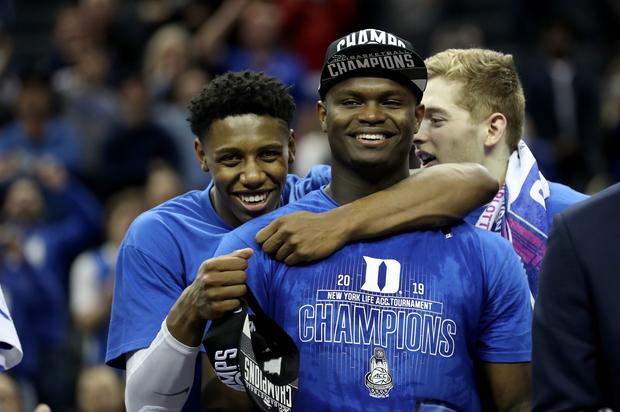 Zion Williamson and RJ Barrett were the most dynamic duo in all of college basketball this season as they tore up the NCAA with the Duke Blue Devils. Unfortunately for both of these young men, they were unable to make it to the National Championship game, although they have set themselves up for some longterm success in the NBA. Both Williamson and Barrett will be drafted into the league on Thursday with Williamson projected to be drafted first overall, while Barrett is expected to go third.

The young prospects are currently doing the rounds at NBA Draft media day and Williamson has been drawing large crowds all day. Among the crowd was Barrett, who made his way through reporters so he could ask his former teammate a question.

Barrett took the opportunity to ask Zion what it felt like to be the most hyped up prospect since LeBron James. Williamson then flipped the question saying that he feels “like RJ Barrett.” The whole thing was pretty funny with both players and the media laughing throughout the whole exchange.

The New Orleans Pelicans have the first and fourth picks in the draft so there is always a chance that they could end up with Barrett if they try to move up a slot. If that happens, the Barrett and Zion duo would surely take the league by storm.