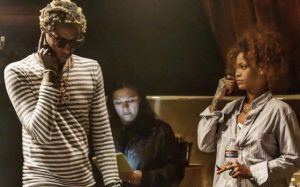 Rihanna and Young Thug recently linked for what seems to be a video shoot. The FENTY Beauty CEO has yet to release music since her 2016 ANTI album. Since her last album release, she has become one of the world’s biggest philanthropist and entrepreneurs through the beauty brand, FENTY. She trolls her fans whenever they asks of any potential new music. It is no doubt that she’s working on new chunes and this weekend may have allegedly confirmed it.

Over the weekend, Thugger and Rih Rih were together at a video shoot in LA Sunday night. According to the Navy, they were preparing for the Savage x Fenty show. The YSL rapper is renowned for his notable fashion choices, so a collab with FENTY is in alignment.

“We either bout to get Young Thug ft. Rihanna or Jeffery in a Savage Fenty teddy,” said one fan.

On the other fan, another fan seemed displease with the speculation of a possible FENTY collab.

“IF THIS ANOTHER FENTY SHOOT B**CH WE DON’T WANT IT.”

Although the tweets speculated the link up to be a secretive, it will be unveiled in due time.

The post Rihanna Spotted At Video Shoot With Young Thug appeared first on The Source.