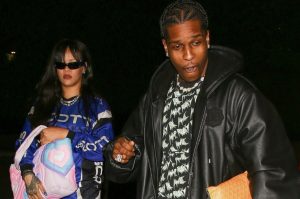 Rihanna and A$AP Rocky have been seen hitting the recording studio recently.  The couple has been spotted several times at a Los Angeles studio in the past few weeks, adding to the rumors that Rihanna may release a new album. It’s been six years since Rihanna dropped her last album ANTI.

The Grammy-winning singer gave birth to her and Rocky’s son back in May, and fans have shared their surprise and excitement that she could already be making music again.

READ MORE: Rihanna is Expanding Her Empire With Fenty Hair

Meanwhile, Rocky is facing felony firearms charges and a civil suit, which he and his lawyer call an extortion attempt from a former member of ASAP Rocky’s crew.

Share your thoughts and comments with us on social media.