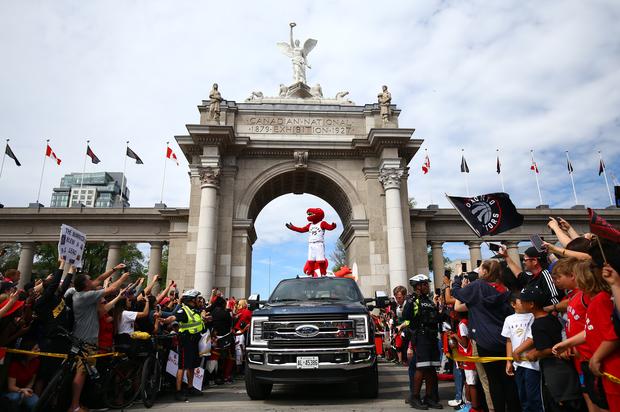 Yesterday was supposed to be a time to celebrate for Toronto Raptors fans as their team won their first ever NBA championship last Thursday. Millions of people took to the streets of Toronto to watch the team travel throughout the city and raise their title trophy in the air as an act of triumph. Unfortunately, the festivities turned sour when a shooting took place near the back of Nathan Phillips Square. Four people were injured and treated for their injuries and it has been reported that all four victims will be okay and that three suspects have been arrested.

One of the alleged gunmen was arrested in dramatic fashion as he was tackled by six police officers. The arrest occurred just outside of the Eaton Center and elicited some screams from frightened passersby. The man seemed to be trying to run away and that’s when he was tackled.

In another video, you can hear four gunshots fired which then leads to people running away from the scene in an absolute panic. Luckily, no more shots were fired and authorities were eventually able to get the crowd under control.

According to TMZ, it was the team’s broadcast man Matt Devlin who was able to calm everyone down.

Marshmello, Imanbek, & Usher Combine Styles On “Too Much”