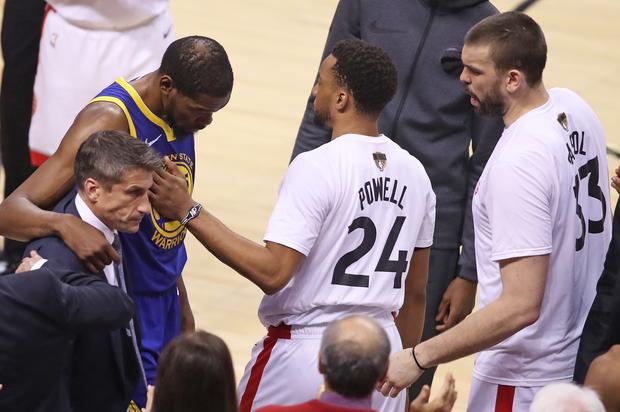 When Kevin Durant went down with a brutal Achilles injury during Game 5 of the NBA Finals on Monday night, the whole NBA world was upset at what had just happened. To add insult to injury, Toronto Raptors fans were accused of cheering for Durant’s injury as they realized it gave them a much better chance to win the game. Warriors players were pretty harsh when it came to condemning the Raptors faithful who ended up cheering in favor of KD as he walked off the court.

The behavior of Raptors fans led to quite a bit of debate over the last day or so but some fans are looking to make amends for what happened. One person even sent flowers to the Warriors offices with a nice little message apologizing on behalf of those who cheered when Durant went down.

“I hereby apologize on behalf of Canada — prayers for recovery,” the letter wrote. “It was a total disgrace.”

The flowers were a nice colorful mix of carnations but unfortunately for the Warriors, the nice gesture won’t do anything to help bring Durant back into the lineup. It looks like KD could be gone for up to a year, which means he would miss the entire 2019-2020 season.