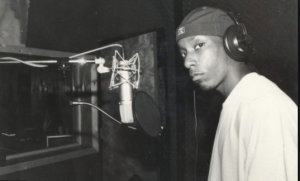 Producer/MC Lord Finesse met Big L on125th street in Harlem years ago and went on to create classics alongside their group Diggin’ In the Crates. Following his untimely passing, Mass Appeal recently announced they are releasing a documentary and Lord Finesse says its wrong. He nor Big L’s family is involved in the project.

Big L’s career began with the rap group Children of the Corn with Cam’ron, Bloodshed and Mase.  In 1992, he signed to Columbia Records and joined Diggin’ in the Crates crew alongside Fat Joe, Buckwild, Showbiz and AG and OC.
Mass Appeal released the first trailer for Foul Child: The Legend of Big L. The documentary explores the life and legacy of the slain Harlem MC. Mass Appeal CEO Peter Bittenbender spoke about the doc in a statement. “We hope this short documentary inspires the creation of a full-length piece to tell more of his incredible story. Although just a small piece of the puzzle,” Bittenbender continued, “we’re proud to unleash something for L’s fans to give a unique glimpse into his legacy.”

Lifestylez ov da Poor & Dangerous debuted at number 22 on Billboard‘s Top R&B/Hip Hop charts in 1995. Shortly after, L parted ways with Columbia. After starting his own independent label Flamboyant Entertainment, he dropped the single “Ebonics” in 1998. The single aught the eye of Harlem native Dame Dash, who was about to sign L to Roc-A-Fella, along with Jay-Z and two other rappers in a group called “The Wolfpack.” Shortly thereafter, he was murdered in his native Harlem.

On his Instagram page, Lord Finesse expressed disdain over the release of the documentary. “I was just informed that the short doc got the green light because the people in charge of the funding was under the influence that DITC was gonna be involved. That’s definitely not the case.. I am not a participant in the upcoming short doc “Foul Child” but what caught me off guard is I was also informed neither is Big L’s family.

. There’s a right & wrong way to do things. This is totally wrong. How do you put this together without Big L’s family involvement

The legendary Showbiz added on his page, “The thought of making a Big L doc/movie or whatever w/o (Lord finesse) & DITC members sounds crazy and is for personal gain only. Docs from ppl who never met or knew him like that putting together his story w/o his fam? Whats the purpose? His story cant be told w/o his music family. So any doc/movie etc.. you see w/o DITC, preemo & kid capri it AINT official !!! Who tf are these ppl?? RIP BIG L!!”

Producer DJ Premier added a comment to both posts, “MIDDLE FUCKIN FINGERS UP…HOW CAN YOU EVEN FEEL RIGHT ABOUT YOURSELF?”

SUPER FUCKIN FACTS SHOW!!!
BIG L IS TOO IMPORTANT TO BE THROWN OUT THERE WITHOUT PROPER HISTORY FROM THOSE WHO WERE THERE AND STILL LIVING…BIG L WE RIDE WITH YOU BROTHER…
DITC AND FLAMBOYANT…

And Fat Joe simply joined in with “I stand with ness.”

Watch the trailer below.

Gunna’s “Wunna” Debuts At No.1 On Billboard Charts