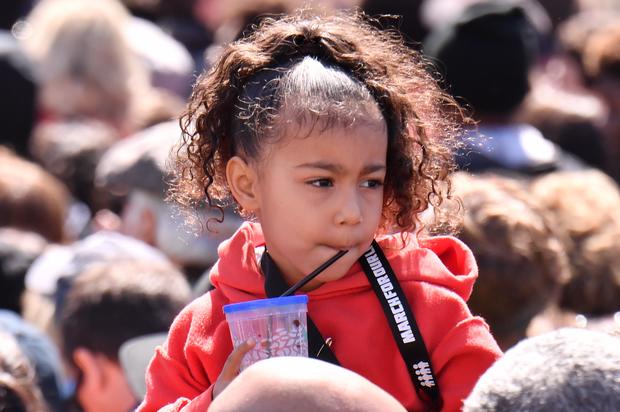 Each weekend, Kanye West has been inviting his friends and family to attend Sunday Service, a soulful concert where he performs gospel renditions of some of his songs. On the regular, Kanye and his choir have been performing “List Yourself,” “Jesus Walks,” “Father Stretch My Hands,” and more. Kanye and Kim Kardashian’s oldest daughter North West has been in attendance most weeks, hopping on stage with her daddy and showing off her dance moves. This past week was no different as the group of musicians performed outdoors with Northie going wild during “Lift Yourself.”

Kim Kardashian posted several videos of her daughter dancing yesterday, updating her Instagram story with clips of North doing her thing. The little girl, wearing an all-black dress with matching black lipstick, started moving her hips in a sassy manner before going all out. After Kanye came over to his daughter and sang his famous “poopity scoop” lyrics in front of her, North began to flail her arms, bouncing around and enjoying herself with one of her friends.

North got even more lit during “Power” before Kim remarked that dancing during Sunday Service is her baby girl’s favorite part of the week. DMX was also present, offering some thoughts to begin the performances.

I don’t know about you but I’m really hoping that these sessions are being filmed so we can cop a Blu-Ray version of each Sunday Service when this wraps up.

R. Kelly Prosecutors Are Tired Of His Complaints Over Prison Conditions