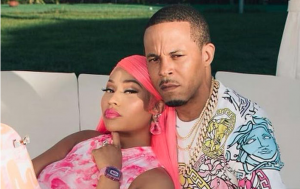 According to a report from TMZ, Nicki Minaj and her husband Kenneth Perry are being sued by the victim in Perry’s 1995 attempted rape case who is now claiming that Minaj tried to bribe her to change her story.

Jennifer Hough, the victim in the case, alleges that the Queens rapstress and her husband have repeatedly harassed her and threatened her to not speak about the incident. Hough claims that she’s suffered from emotional distress as a result of the alleged direct and indirect harassment.

Hough claims that the harassment began in 2018 when the Pettys became a couple, with Minaj allegedly making statements about how Petty was “wrongfully accused”. When Perry was charged for not registering as a sex offender in March 2020, Hough claims Minaj attempted to bribe her by offering to fly her and her family to Los Angeles in exchange for recanting her story. Not long after, Hough alleges that Minaj contacted her brother and indirectly offered her $500K to change her story.

Hough also claims that Minaj sent lawyers to her home to try to pressure her into recanting her story. Hough claims she even moved from her home in August 2020 after one more alleged cash bribe attempt of $20k and another alleged threat to her safety.

The Pettys are being sued for intentional infliction of emotional distress, harassment, and witness intimidation. Hough is also suing Kenneth for sexual assault in relation to the 1995 rape case.

The Pettys have yet to respond to the allegations or the lawsuit. TheSource.com will update this story as details develop.

The post Nicki Minaj And Husband Sued By 1995 Attempted Rape Victim appeared first on The Source.