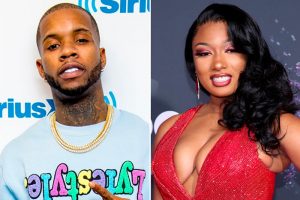 The plot thickens between Tory Lanez and Megan Thee Stallion. While the case is still pending and awaiting for trial, both sides continue to speak their peace. Earlier this month, Tory Lanez was charged with one count of assault with a semiautomatic handgun. The “Say It” rapper alerted his followers that he was going to hop on Instagram Live and did so on Tuesday night (Oct. 20). This is the first official statement we’ve gotten from the Toronto artist since the incident occurred in mid-July.

During the IG live, Tory claimed Megan’s story to be false and looked to corroborate his innocence. He begins by saying he received a call from Roc Nation, who manages the “Savage” rapper, saying “it would be in his best interest” to not make a statement about what occurred that night. The 28 year-old rapper continues by questioning her refusal to tell the police that she was shot after being on a stretcher. He explains that while himself, his body guard and Megan’s friend were being question, she conversed with the police.

In addition, he points out that she has endured a lot of personal grief. Therefore, the Houston native may be susceptible to a perception of parental guidance. He also addressed the claim that he doesn’t respect Black woman. While Tory expressed his discontent with Megan’s story, he says that he still considers her a friend.

Before the Live could end, Megan Thee Stallion took to Twitter to respond to Tory saying, “This n***a is genuinely crazy.”

As the trial approaches, Tory Lanez could face a maximum sentence of 22 years in prison if convicted.

Steelers Vs. Ravens Postponed For A Third Time

Tyler, The Creator Is A Voice In GTA 5 & People Are Just Realizing It