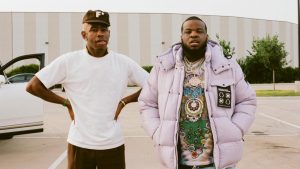 “..It’s been a lil minute but its time some real sh*t again,” captioned Maxo Kream in a new Instagram post unveiling the cover art to his new album, Weight of the World, that drops on Monday — October 18.

The album that includes the new Tyler The Creator-featured single “Big Persona” will be released on Monday, which has fans curious why not the normal Friday release. Well… the release coincides with the anniversary of the death of the Houston rapper’s cousin Woodrow Kream and his niece’s birthday, he explains on Twitter.

He tweets with album trailer: “I lost so much that I can never get bacc but I’m still here ten toes down.”

MORE: Maxo Kream punches fan who threw a beer at him

Kream shares Weight of the World was inspired by the death of his younger brother Money Madu, who was gunned down on March 11, 2020, in Los Angeles.

In other news, Maxo Kream became a Girl Dad with the birth of his new daughter last week. See a video of Papa Kream with his new baby girl below.

Peep the cover art to Maxo Kream’s new album, Weight of the World.