Man Who Robbed Safaree Is Facing 50 Years In Prison 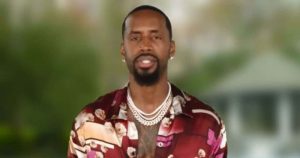 Safaree was robbed at gunpoint in 2018. One of the men responsible for the crime has been convicted. According to North Jersey News, Tacuma Ashman of Irvington, New York was found guilty of robbing Safaree of $180,000 at gunpoint in a Bergen County courtroom on Monday, November 21st.

Ashman was convicted of first-degree robbery, weapons possession, and resisting arrest but acquitted on conspiracy charges and owning a handgun without a permit. The 43-year-old faces up to 50 years behind bars when he appears for sentencing on January 28th, 2022.

Safaree was on his way to an interview with The Angie Martinez Show when the incident occurred.

“I just got robbed, two dudes with guns just ran up on me,” he told Martinez just hours after it happened. “Had me face down on the floor with a gun to my head. They just took everything.”

TMZ later released surveillance video of the robbery which showed two men approaching Safaree and his friend with their guns drawn. They then began to go through Safaree’s red fur coat the same one he wore during his interview with Martinez, looking for valuables. Safaree was then ordered to get on the ground with his face to the floor.

Authorities ended up in a high-speed chase with two suspects, Jonathan Ricketts, and Shawn Harewood, over the George Washington Bridge. One of the suspects ended up crashing his car and fleeing on foot. Once the NYPD got involved, the alleged robbers were captured 12 blocks apart from each other.

Harewood was arrested that night near 144th Street in Manhattan. Police picked up Ashman weeks later in Newark. Prosecutors said Ashman’s driver’s license, cellphone, and a red hat he wore during the robbery were found inside the crashed car. Authorities also recovered Samuels’ wallet and jewelry.

Harewood who was the brains behind the robbery and Ashman were co-defendants in the trial. Another suspect, Carl Harry, pleaded guilty to conspiracy in 2019, but a judge declared a mistrial for Harewood after his attorney withdrew from the case over a personal matter. A new trial date for Harewood is pending.

The post Man Who Robbed Safaree Is Facing 50 Years In Prison appeared first on The Source.