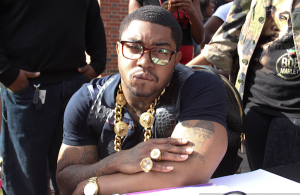 Make many entertainers in the industry, there comes a time where a performer has to make a decision to keep the coins flowing. In a sit-down with Big Facts Podcast, Darryl Raynard Richardson, better known as Lil Scrappy has an open conversation about some of the decisions he had to make in his career, one including becoming a cast member of the popular VH1 reality show, Love and Hip Hop.

Scrappy was asked if joining reality television as a rapper was like “signing a death certificate” for their music career. “Yeah, I’ve seen it happen,” the Atlanta native answered.  “Before I even got into it, I was looking at [it], I was like, ‘Damn.’”

“But I thought about, I was like, ‘Sh*t, I ain’t even got a Rap career right now, so, you know what I’m saying, I don’t even give a f*ck,’” he continued.  “I didn’t even give a f*ck. And then for real, like, when I say I’m connected with the god that created me, like, he put something in me. He was just—like Bank said man—‘Just keep that sh*t gangster, be yourself, my n*gga.’”

Scrappy then shared that in his early stages of becoming a reality tv star, he was told that production would not be following him heavily, just enough to capture his love life. “Even if that, if you not careful, it’ll f*ck your whole love life up. And it done f*cked every last one of mine up. Just destroyed it.”

Scrappy is currently married to Adi “Bambi” Richardson after tying the knot in 2017. The couple shares two beautiful children together, Xylo and Breland Richardson.