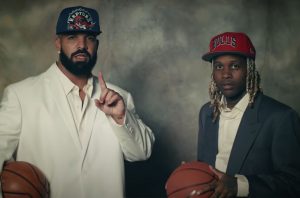 Lil Durk continues to show gratitude to Drake. The Chicago rapper achieved his highest-charting song to date after being featured on “Laugh Now, Cry Later.” The track peaked at No. 2 on Billboard Hot 100. The track was certainly a surprise to fans. While many fans wanted a longer verse from Durkio, he is thankful nevertheless for the opportunity to collaborate with Toronto’s chosen one.

He says he could not do so because of COVID-19. The collaborations with Drake can come few and far between at times. Hopefully with the success of “Laugh Now, Cry Later,” fans get more Chi-town and T-dot link-ups. In his newest gift of gratitude, Durkio gives the 6 God a massive OTF/OVO chain, combining their two brands. Drake took to his IG story to show off his newest piece of ice.

While Drake’s highly anticipated 6th album, Certified Lover Boy is expected anytime soon, he continues to send packaged gifts of album merch to a number of celebrities and close associates. The OVO CEO’s birthday is approaching next month. It is possible he is saving his album release a day before his birthday, Friday, October 23rd. Knowing Drake, we won’t know until its release.