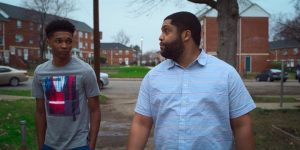 Kevin Durant has released the official trailer for Swagger, the highly anticipated drama inspired by Durant’s experiences in the world of youth basketball, and the players, their families, and coaches who walk the fine line between dreams and ambition, and opportunism and corruption.

The first three episodes of the ten-episode series will debut globally on Friday, October 29th on Apple TV+, followed by one new episode weekly, every Friday.

You can see the trailer below.