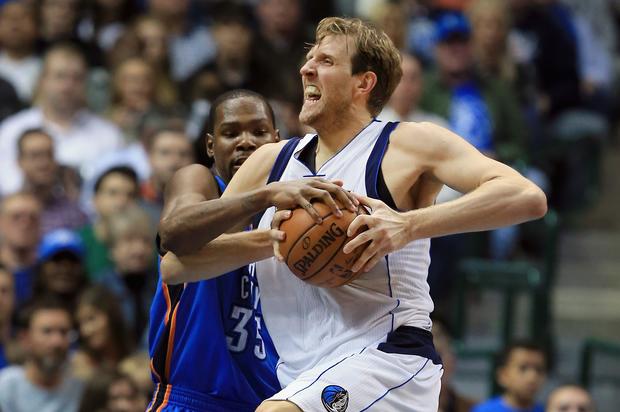 As Dwyane Wade makes his farewell tour throughout arenas around the NBA, many fans have been keeping their eyes on another aging veteran in Dirk Nowitzki. The Dallas Mavericks legend is in his 21st season in the NBA and it seems as though everyone is assuming that he will retire at the end of the season. Dirk has never really confirmed this news so it’s interesting to see so many assumptions being made. Golden State Warriors star Kevin Durant also finds these assumptions peculiar. The Mavericks routed the Warriors 126-91 on Saturday as Dirk scored a season-high 21 points. After the game, Durant was asked about Dirk’s retirement, although he didn’t seem too amused by the question.

“Has Dirk retired yet? I feel like everybody’s pushing him out the league,” Durant said according to Complex. “So, I’ll wait til he makes his official announcement to really comment on that.”

Just a few weeks ago, Nowitzki spoke about how he hopes to have the strength to go at least one more season before retiring.

“I think I’m going to make that decision later on, but I think the future’s bright,” Nowitzki told ESPN. “I’d love to be there for the young guys one more year, but I think it depends on how the body feels. I’ve had some issues, obviously, this year. I had some knee swelling here the last few weeks, actually before the All-Star break, so it’s not all great. But like I said, I am feeling better. I am feeling a little stronger.”

With a record of 29-44, the Mavericks are 14th in the Western Conference.

Tyler Perry to Cover Funeral Cost of 8-Year-Old Secoriea Turner: ‘When Does This End?’

Feds Believe Jurors on R. Kelly’s Case Are in Danger, Files Request to Leave Them Anonymous

Indiana Man Was Nearly Lynched and No Arrests Were Made