Jacob Latimore Remembers Surviving Off McDonald’s During His Career Rise 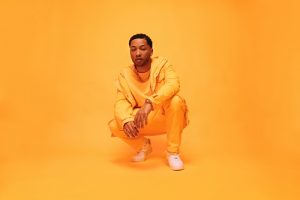 In addition, sixty-six fans, one for every year of McDonald’s history, will receive one million MyMcDonald’s Rewards points, stretching the life of your “McDonald’s Money.”

“We have the best fans in the world who deserve to unlock perks for their loyalty,” said Alycia Mason, Vice President of Digital Customer Experience & Media, McDonald’s USA. “That is why we are so excited to bring MyMcDonald’s Rewards nationwide and celebrate with all of our guests on World Famous Fan Day. We’re eager to repay years of fandom by giving them what they love most about McDonald’s – our delicious food – for years to come.”

Speaking with The Source, Jacob Latimore revealed McDonald’s played an important part in his survival.

“When I first moved to Atlanta, I was staying with like 30 people and the reason I was staying with that many people is that everybody was trying to pursue their music career,” Latimore said. “You have in one room, it was three producers and another room was like two writers in and their management. And then the cameraman in another one. We were running this mini Motown and honestly, the dollar menu was like the only thing we could afford. It was a meal for everybody just to eat real quick and move on with their day. McDonald’s is our best friend.

“So when this opportunity came around, it really just kind of brought me back home to those grounded memories where McDonald’s is just really holding it down. The loyalty contest is just super interesting because whoever the winner is, they’ll get free French fries for life. So, you know, that’s like, that’s like super dope. And I thought that was super interesting. So, um, I wanted to be a part of that and, uh, you know, I’m kind of sad. I can’t choose myself.”

As for what Jacob Latimore chooses to eat these days, he is in favor of the new chicken sandwiches and states McDonald’s has the best fries on the planet.

Aside from the McDonald’s contest, Jacob Latimore highlighted some of the special moments in his career over the past year and what is coming next.

We are nearing the end of this season of the Chi. What was your favorite part of filming this season?

I think every moment we just got a chance to be around each other, obviously, COVID was a big obstacle for all of us. So we had to make sure everybody was tested before we could kind of link up and do our thing. That was probably the toughest part, but honestly, every time we got on set and just to be around each other there, it just heightened the moment because we all had been in the house. We got a chance to finally see each other it was hard not to give each other a hug. But this season, every moment was special.

This was probably the heaviest that we have seen your character in this series. What do you want people to take away from both your character and your performance?

I just want to be relatable as possible and grounded as possible in these stories. I think this is the most grounded character I’ve ever played. I feel the impact a lot more with this show out of all the other projects I’ve done. And now, when I’m outside I’m not even called Jacob, it’s Emmett. It feels personal to them. It feels relatable. That’s how it’s supposed to be with your favorite shows. When we watched Martin and Fresh Prince, Everybody Hates Chris, we feel like we grew up with them as well. I think that’s the beauty of just playing this character. I feel like our show is reality is not escapism. We really try to talk about what’s going on in the neighborhoods. We don’t try to fantasize anything. It’s what’s going on outside your door.

You also recently just started a movie called Gully. How was it promoting, preparing, and everything for that role, also in a pandemic?

What’s crazy about Gully is I shot that about four years ago. People don’t even know that. I honestly didn’t think the movie was going to come out. We took it to Tribeca Film Festival in New York and after, it was just kinda quiet. On the studio side of the film, I think they got scared, you know what I mean? I think they kinda like was like, ah, this content is just, oh no. The original script was very, very rough and rugged and some things that probably were just too explicit to see on screen. So I kinda got a little discouraged because it was one of those roles. I felt like I worked my hardest on and I feel like nobody’s going to get a chance to see it. But it ended up coming out and we ended up finding some distribution for it. This was a big thing for me and I was just excited for people to see me inside this totally different character.

You have a promising music career. I know last year we got Leo Season and we’ve heard a couple of other pieces that you’ve been on since then, but is there anything that we can expect from you on the music front, in the forthcoming months?

I’ve definitely got some songs ready. I also stepped back from the studio for a little minute just to kind of live life a little more. I wanted to spend more time and get some inspiration and be around my girl and my family. My mom just got married last week, Saturday. But I also feel like a lot of content I did dropped last year. It’s still spreading. I see the club dates coming in and a lot of offers coming in. So I think my goal this year is to also just promote the stuff that’s already out and get in front of the fans again as the world’s opening back up.

The post Jacob Latimore Remembers Surviving Off McDonald’s During His Career Rise appeared first on The Source.