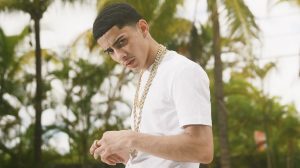 J.I. The Prince is one of the artists to look out for following the release of his breakthrough single “Need Me.”

The Brooklyn native effortlessly blends the sounds of Hip Hop, reggaeton, and reggae together to make the songs his fans were singing along to at the 2021 Rolling Loud Miami festival.

Like many Hispanic Hip Hop artists, J.I. has been accused of cultural appropriation for his use of the N-word and for rocking cornrow braids with extensions.

The 19-year-old acknowledged that he understands where the controversy comes from but proudly highlighted his African roots and reassured that he’s “not on no negative timing.”

Check out the full interview below: