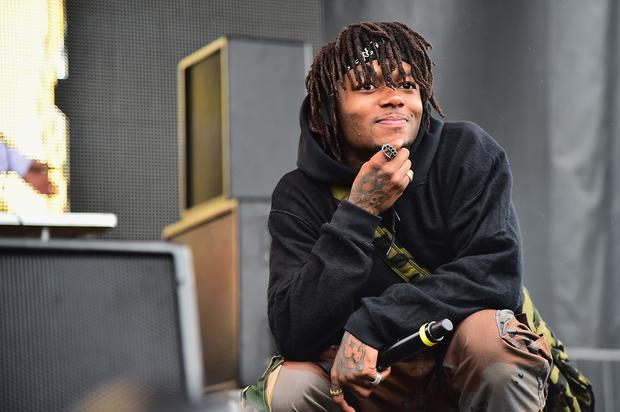 As J.I.D.’s “Catch Me If You Can” tour continues with a SXSW stop in Austin, Texas, the Dreamville rapper took a moment to break bread with The Human Serviette. As per usual, Nardwuar prepared his probe with several namedrops from J.I.D’s formative years, including a shout-out to fellow Spillage Village alumni EarthGang. J.I.D’s artistic sensibilities are displayed upon receiving a Langston Hughes poetry vinyl, which he teases will form the basis of his next project.

Eventually, Nardwuar nearly reveals the name of J.I.D’s former school, which prompts the rapper to joke about pulling a Lil Uzi Vert. His sunny disposition returns upon receiving another thoughtful gift, an exclusive Titanic pin from 1997. “You really making my day,” says JID, “I don’t even wanna go do no music today, I wanna walk around with my good stuff.”

The shift eventually returns to hip-hop, when J.I.D expresses his admiration for Goodie Mob. Like Santa himself, Nardwuar comes through with yet another present: a pair of Goodie Mob instrumental LPs. “They would appreciate me rapping over this,” J.I.D says, “they followed me on Twitter the other day too.” When Nardwuar suggests he implement the instrumentals into his live set, J.I.D’s eyes widen with excitement. “Is that a challenge?” He then comes through with an exciting hint of things to come, telling Nardwuar “you definitely going to see these freestyles pop up, and they gon’ be inspired by you.”

As the interview concludes, J.I.D receives a Smack DVD with Eminem on the cover (“I love Eminem”,) and explains that Battle Rap is the reason he started rapping to begin with. “Battle rappers are like, the most talented level of rap there is. The most creative, visuals, gun bars. This is why I say some of the things I say, why I’m waiting for somebody to try me. This is what I do.”

Respect to J.I.D for keeping it humble and respectful, and respect to Nardwuar for facilitating the release of some new J.I.D music. Check out the full interview below, and read our own exclusive interview with J.I.D right here.