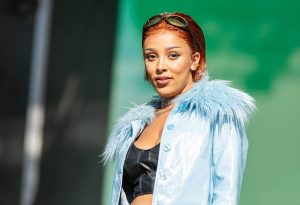 Doja Cat is under fire again after an old song of hers resurfaced on social media on Friday. A song titled “Dindu Nuffin” was posted all over the internet and the song title which is also the chorus plays on racist themes related to police brutality.

The phrase “Dindu Nuffin” seems to be a stylized pronunciation of “didn’t do nothing.” “Dindu Nuffin” is a phrase people in the Alt-Right spaces of the internet use to describe Black victims of police brutality.

Doja was also exposed by Hollywood Unlocked for video chatting with racists on tiny chat. According to the gossip sites source, Doja was known for associating with racists and exposing herself sexually online.

The hashtag #dojacatisover was trending overnight after the outpour of evidence proving that at best Doja Cat comfortably associates with racists. The “Juicy” rapper has not yet responded to the allegations.

This is the second time the Los Angeles native has caught heat for insensitive rhetoric, the first being the use of a homophobic slur on Twitter and initially defending the use of the word before eventually apologizing.

Gunna’s “Wunna” Debuts At No.1 On Billboard Charts