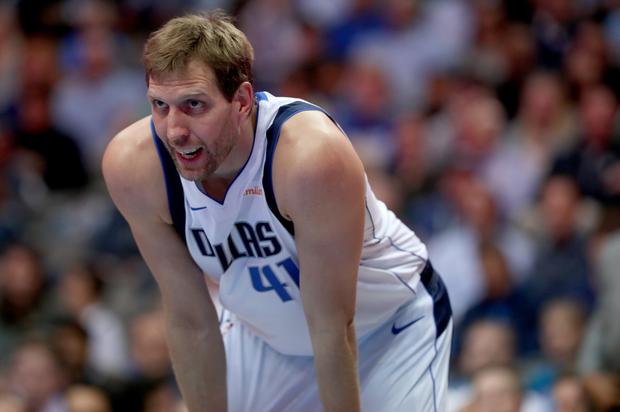 Just a week or so after LeBron James passed Michael Jordan for fourth on the all-time NBA scorers list, Dirk Nowitzki looked to move up the list as well. Nowitzki is in his 21st NBA season and on Monday night, the Dallas Mavericks legend surpassed Wilt Chamberlain to become the sixth-highest scorer of all time. Coming into the night, Dirk only needed four points to surpass Wilt and he did just that after draining his first two shots. Nowitzki finished the game with eight points, pushing his career total to 31,424.

“The ‘Big Dipper,’ huh? It’s amazing,” Nowitzki said referring to Chamberlain, according to ESPN. “It’s been a long time coming this season, knowing before the year it was only 200-something points [away]. Then there were times when I thought I’m not going to make it, the way the season went with the injury. Coming off the injury was just super, super slow. But the last few weeks felt better, and I’ve been playing better, and the team was obviously looking for me and telling me to shoot.”

Nowitzki hasn’t made it clear whether or not he is going to retire after the season, although he did say that when he looks back on his career, his recent accomplishment will definitely stand out.

“It’s surreal at times to be up there with some of these names,” Nowitzki said. “But I’m going to really let that all soak in once my career is over and then show my kids.”