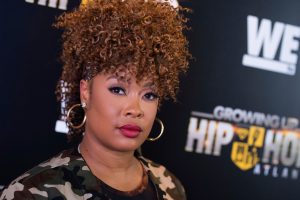 Well, there has been a longstanding beef between Eminem and Mariah Carey. Recently, more details about their affair have been bubbling but Da Brat gave a sneak peek into what was really going on in their relationship, basically a lot of nothing.

Da Brat appeared on Dish Nation and gave a little sneak peek into Carey’s memoir revealing that Slim Shady came up a little short sexually in his dealings with the global superstar.

“He was never in bed with her. Let’s get this clear,” said Da Brat. “When y’all read, y’all will see that he prematurely ejaculated when they had all of their clothes on because he was excited that he was with Mariah. There was no sex.”

You can hear Da Brat say it below.

The post Da Brat Shares the Intimate Details of Mariah Carey and Eminem’s Relationship appeared first on The Source.