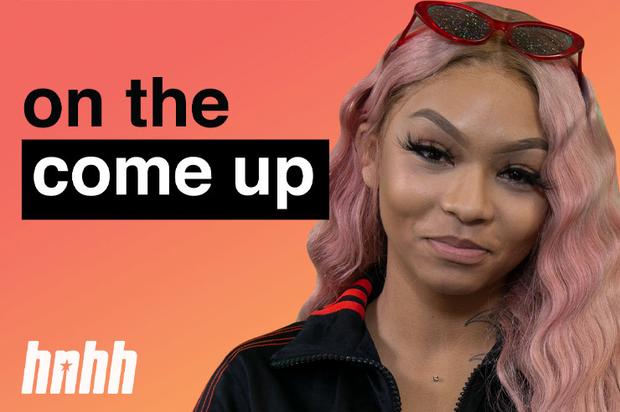 While men have gravitated toward the “Baby” moniker, many of hip-hop’s leading ladies have leaned toward the “Doll” movement. Yet don’t expect an amorphous blob of blending styles, as Cuban Doll has been ably forging her lane for a minute. Having made waves and awakened lusty suitors through her explicit bangers like “Pussy Worth,” Cuban has solidified herself as one to watch moving forward. Born and raised in Dallas Texas, Cuban has dealt with praise and notoriety in equal measure, bouncing from Atlanta to her current home base in Los Angeles.

“My grandma, she raised me,” explains Cuban, reflecting on her early musical influences. “I always grew up listening to a lot of old school music like Jodeci, all that type of freaky music. Aalyiah. Old school music.” She also cites Chief Keef as having made an impact, as well as the greater Chicago wave. “Before rap, I was doing a lot of modeling stuff,” she says. “But I always been known, or lit, that’s how I got into rap. People used to think I rapped before I got into rapping. I was always around the studio.”

She also makes sure to share some of the pitfalls of signing to a major label, many of which inhibit creative control. “I didn’t get to put out music when I wanted to,” she says. “I’d be in the studio, working for a month or two, and they’d be like ‘no, we want you to sound that way, make a song like this person.’ Well, that’s not me. They always try to change you, when you not ready for change. The time will come. They go get some major artist and be like ‘sound like them…I’m open to do new stuff, but when you’re forced to do it, it ain’t fun no more.

“I want to work with Ski Mask,” she reveals, sending out a few feelers. Perhaps she’ll have plenty of opportunities, given her relatively free slate. “Since I have so much freedom, I want to drop more music,” she explains. “I want to drop an EP. I want to drop some singles. Videos. I have a tour in May.” Yet the plans don’t end in December – Cuban makes sure to keep her eyes on the future, ensuring longevity for years to come. “I want to open up more businesses. I’m still rapping. Still investing in myself. Expanding my brand. Signing people. Who want to sign to me?”

“My message to the youth is, the younger the better,” she says. “Don’t ever think you’re too young to do something. It’s better to start young than to wait, and start doing all this. You never know what you’re going to do. You might want to switch careers.”

For more from Cuban Doll, be sure to check out the full episode of On The Come Up. Look for more episodes of the ongoing series to drop on a weekly basis, and while you wait, be sure to hit the playlist after the jump.