Colin Kaepernick Calls Out NFL Over ‘Propaganda’ While Black-Balling Continues 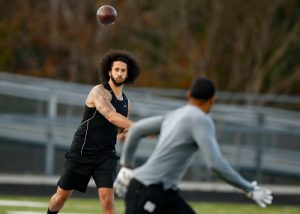 Sunday the 2020 NFL season got into full swing. Jerseys, helmets, and endzone paint all called for an end to racism, amongst other calls for action. Colin Kaepernick saw all the efforts online and called out the league for “propaganda,” while he and former teammate Eric Reid are on the sidelines in a public blackballing.

Eric Reid played last year with the Carolina Panthers but was cut. He is thought to be one of the best free agents available, despite not having a home. Kaepernick retweeted a Deadspin article about the blackballing and attached his own message.

“While the NFL runs propaganda about how they care about Black Life, they are still actively blackballing Eric Reid for fighting for the Black community,” Kaepernick wrote. “Eric set 2 franchise records last year, and is one of the best defensive players in the league.”

During the offseason there were rumors of Kaepernick being cleared to receive tryouts, however, a report from Pro Football Talk’s Mike Florio revealed there is “zero interest” in bringing the ousted quarterback on a roster.

The post Colin Kaepernick Calls Out NFL Over ‘Propaganda’ While Black-Balling Continues appeared first on The Source.