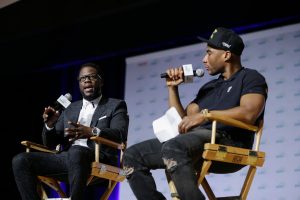 The pair are working together on a few series. “The slate of episodic long-form Audible Originals will feature fiction and nonfiction scripted series from both emerging and high wattage superstar talent that the two entertainment giants personally source, cultivate and develop,” it said in a press release. “It will also include projects co-written and performed by Kevin and Charlamagne, as well as programs written and performed separately.”

There were rumors that the radio host was going to leave The Breakfast Club once his deal was up in December.

It’s hard not to think about Joe Budden’s rant and how badly that aged.