Chargers’ Melvin Gordon Addresses Contract Holdout: “You Know, I Want To Get Paid” 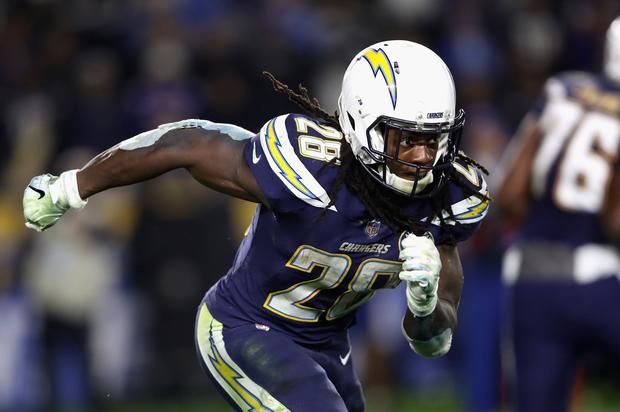 Nothing’s changed, Melvin Gordon still wants out of Los Angeles unless the Chargers budge on their stance regarding a contract negotiation heading into next season.

“I want to end up with the Chargers,” Gordon told the press at SportsCon in Dallas, TX. “That’s my home. I’m not going to sit here and be like, ‘Man, I don’t want to go back to the Chargers, dah, dah, dah.’ Like that’s the team who blessed me with an opportunity. They started my life. They changed my life. Out of all 32 teams, that was the team that called. I can’t forget them for that.”

At 26-years old, Gordon is entering the final phase of his entry deal with the Chargers, with an option for a 5th term at an annual rate of $5.6 million. As outlined in a statement to the press (yesterday), Melvin will not report to training camp unless those contract stipulations are restructured.

In his defense, the NFL teams, basically all of them without exception, are guilty of overusing their feature tailbacks, whilst undervaluing them at the cash register. For Gordon to have garnered to Pro Bowl nods on a career average of 5.1 yards-per-carry, by the age of 26, something must be terribly wrong about the NFL’s collective bargaining agreement.

Gordon closed his account at SportsCon by reiterating that if an opportunity presented itself, from an interested party elsewhere in NFL he’d be on the first bus out of Dodge. “You know, I want to get paid. That’s just kind of what it is. Hopefully I end up a Charger. That’s the goal. I want to end up with the Chargers,” he said in closing.