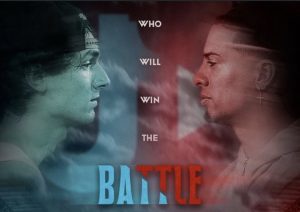 “Social Gloves” is just days away, but Austin McBroom is keeping the same energy with his opponent, Bryce Hall.

The 29 year-old-famed YouTube star has remained confident leading up to his “YOUTUBERS VS. TIKTOKERS” bout against Bryce Hall. Back in May, McBroom and Hall got into a gloves-off scuffle during the fight’s press conference. The scene created a viral moment, where security and others present had to intervene. Although Bryce Hall was the aggressor in that instance, he didn’t expect to end up on the ground following his attack.

McBroom is no stranger to athletics. He is renowned for his skills in a number of sports, especially basketball. Although his athletic ability will work in his favor, his preparation for the upcoming boxing match slightly differs from what he’s done in the past.

“This sport right here is probably more mental than anything I’ve ever done,” says McBroom. “Conditioning is one of the key things you have to focus on.

He credits basketball as one of his go-to conditioning methods in order to get in tip-top shape.

“We’ve been going crazy for the past 3 months, in order to get my conditioning back to how it was when I was in college, which was 4 years ago.”

The ACE Family athlete has received advice from boxing legend, Evander Holyfield, multiple world champion Danny “Swift” Garcia and more. Both showed up to give their support during McBoom’s training.

“Over the past three months, I’ve met a lot of professional fighters. They’ve come to let me know, ‘you got this.’ I really appreciate both of them for showing a lot of love and support and shoutout to Fight Hype for making that happen.”

As far as fight predictions, McBroom’s level of confidence remains at an all-time high.

“The fight is definitely not going the distance,” he says. He (Bryce) is not ready. He’s not athletic enough or coordinated enough. I just hope he’s been taking the training serious because I would hate to actually hurt the kid.”

While those are some antagonizing fighting words, it is fitting for what’s to come this weekend.

The “Battle of the Platforms” is set to be a star-studded show with performances by Lil Baby, Migos and DJ Khaled.

It all goes down on Saturday, July 12th at Hard Rock Stadium in Miami. Fans can purchase PPV tickets here.