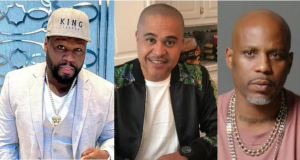 Irv Gotti received an onslaught of criticism from both the Ruff Ryder family and fans, who considered him out of pocket for his comments about DMX’s cause of death. Now, after Gotti has backpedaled and apologized for his insensitive statements, 50 Cent has come out on social media to send his condolences to X’s loved ones and close friends, saying, “I’ll say what i feel when i’m around people i know loved him.”

Gotti’s initial comments caused both Swizz Beatz and 50 to go straight at the Murder Inc. CEO for saying that DMX died from a “bad dose of crack” and fentanyl.

50 has now offered up his condolences to X and family with an Instagram post led by an article screenshot with an aged image of Irv and DMX. In the caption, 50 wrote, “@therealswizzz @jadakiss and all the other people close to DMX i send my sincerest condolences. I don’t deal with losing people well, over the years i lost so many people i don’t process things the right way. so i wait till i feel something to say something R.I.P to DMX, I’ll say what i feel when i’m around people i know loved him. God bless him !”

The post 50 Cent Sends Condolences To DMX’s Loved Ones After Irv Gotti’s Apology appeared first on The Source.